What is the difference between Acrobatics vs gymnastics

This is one of the most asked question parents have, when we mention that we offer acrobatics and tumbling but not gymnastics. While the two are very similar, it’s the execution that makes them different. Both require the performance of extraordinary physical feats such as balance, agility, flexibility and mastered motor coordination.

Let’s start with gymnastics. Traditionally, gymnastics is a sport practiced on a spring floor, a mat with actual springs built into it, which allow gymnasts to get the most height in their tricks with the most forgiving surface possible to prevent injury while performing these extreme tricks. In gymnastics, you will typically train with a multitude of different apparatuses, such as beams, a vaulting horse, horizontal and parallel bars, rings and a pommel horse. Floor tricks are hard hitting, single pass tricks performed with a strong and fast prep and a landing that is solid (think the term “stick it”). While gymnastics is a sport with it’s own competitions, it is most generally incorporated in cheerleading, which requires more stiff, hard hitting motions and hard hitting, advanced gymnastic tricks.

Acrobatics, (also referred to acro in short) is thought to be a subdivision of gymnastics. Unlike gymnastics, acro is practiced and performed on a hard floor or stage. Acro requires dancers to train their bodys to withstand the impact of the hard floor safely. For this to happen, dancers must learn how to lift their body enough to execute their tricks, when a gymnast would utilize a spring floor. Also unlike gymnastics, acro is a softer, more graceful line movement with a more fluid prep and landing. Gymnast perform hard hitting single passes, where as dancers will seamlessly incorporate a trick into their choreography without stopping in between tricks. Acro also focuses more on body contortion and tricks that defy the center of gravity, whereas gymnastics tricks are meant to be executed in straight lines.

While all of this remains true, there is a small exception to all of this, and that is in the genre of Hip Hop. In Hip Hop, moves are still incorporated in the dance and display fluidity, but the tricks used in hip hop are performed much “harder” and end with a hard landing (such as headsprings, kip ups and back handsprings). Regardless, these advance tricks require a strong dance and acro foundation that is achieved with proper training and discipline.

In short, both sports will strengthen the body, motor coordination, flexibility and self confidence, but the major difference is the approach, landing and which form of creative movement their incorporated with when not performed alone. Both will be similar, some tricks will overlap and then each have their own tricks.

If the end goal for your dancer is to have a well rounded dancer who can handle advanced and exciting choreography, acro will condition a dancer for just that. If the end goal is to learn the most advanced tricks in a single passed, hard hitting tricks and eventually be a strong cheerleader, gymnastics training is what will get them there. 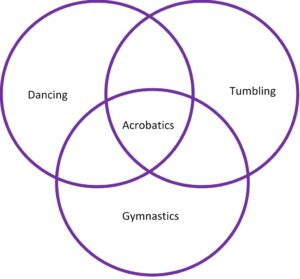